The Fair Elections Oakland coalition has launched an effort to pass a public campaign financing program—called “Democracy Dollars”—like the vouchers used in Seattle elections since 2017.

A coalition of community groups in Oakland launched a campaign last week to bring an innovative public campaign financing program to city elections.

In a virtual kickoff event on March 2, the Fair Elections Oakland coalition began education and local outreach efforts ahead of a planned ballot initiative for “Democracy Dollars,” a program that seeks to boost small donations and incentivize candidates to appeal to wider swaths of city residents, as well as enable less-affluent candidates to run competitively for office against those with wealthy donor networks.

Under the program, every eligible Oakland resident would be mailed vouchers that can be donated to participating candidates for city office—who agree to abide by new contribution limits, reducing the influence of large donors—and can be redeemed for funding. The Oakland “Democracy Dollars” proposal would also require candidates who opt-in to the voucher program to participate in five public debates and follow public disclosure requirements. The vouchers are initially proposed to be redeemable for $100, the same amount as a similar program in Seattle.

The Fair Elections coalition includes Oakland Rising, a social justice collaborative that is one of three grassroots groups in the Bay Rising alliance of community organizations led by working-class people and people of color. Also in coalition are the democracy reform group California Common Cause, the League of Women Voters Oakland, the American Civil Liberties Union of Northern California, Asian Americans Advancing Justice – Asian Law Caucus, and the civic technology nonprofit MapLight.

“Small donors play such a small role within the electoral process, and less affluent neighborhoods are underrepresented,” liz suk, executive director of Oakland Rising, told Sludge. “This initiative is potentially going to flip that script. We’re talking to low-propensity voters and targeting very specific communities not only to build power, but also to change the face of who is leading our government in Oakland.”

In a city where residents say they’re feeling the effects of accumulated tech wealth, from high housing prices to long commutes, Oakland’s 2020 elections were awash in record high amounts of money. Some $5 million went into the latest Oakland candidate elections, including direct fundraising of $2.6 million and outside spending by independent groups of $2.4 million, according to a new report by researchers at the Berkeley-based MapLight.

While money in city races recently hit a new high—even without a mayoral election on the ballot last cycle—the sources of campaign funding remain familiar: contributions came largely from Oakland’s richest and whitest neighborhoods. MapLight’s analysis of Oakland elections since 2014 found that zip codes with median incomes over $75,000 gave 66% of campaign cash, while comprising only 40% of the city’s population. Small donors made up a tiny slice of contributions—those giving less than $100 made up only 6% of all candidate funding.

The wave of outside spending meant greater influence from independent groups and special interests. MapLight found that Oakland residents provided just half of candidates’ fundraising since 2014, and that contributions from corporations, nonprofits, unions, trade associations, and political committees made up 17% of the winning candidates’ funding.

This year’s campaign in Oakland comes after the third cycle of “democracy vouchers” usage in Seattle municipal elections, the first of its kind in the nation. In the Seattle program, four vouchers worth $25 apiece can be donated in paper form or online to participating candidates, who agree to abide by contribution limits and other disclosure requirements, and redeemed for campaign funding from the state.

In Seattle’s experience since 2017, local political organizers testify and academic studies confirm that use of the voucher program has been growing among both candidates and city residents. For the past several years, research has shown that Seattle’s voucher users made the donor base significantly more representative of the city’s population in terms of age, race, and income, boosting engagement in elections by providing everyone with a way to make their first small-dollar contribution.

In discussing the landscape of Oakland contributors, suk said, “The flatlands are majority of people of color and immigrant folks, the hills are predominantly white and affluent. The majority of campaign donations are coming from the hills, and also we’ve seen a huge influx of corporate money—Lyft and Michael Bloomberg and others are pouring money into Oakland. In 2018, we had one school board race where Bloomberg’s PAC spent $150,000 on a school board race that generally costs only $40,000. We’ve seen Lyft come into Oakland and run a campaign against an incumbent rep at large.”

The MapLight analysis showed two runaway top donors to independent groups involved in Oakland elections over the past eight years: Michael Bloomberg with $920,000, whose donations supported pro-charter school groups; and Lyft with $439,000, which sought to unseat  City Councilmember Rebecca Kaplan. Overall, eight donors and organizations that gave at least $75,000 to independent groups accounted for nearly half of all outside money in the period reviewed by MapLight.

The city’s pool of public campaign funding has suffered in comparison with better-funded cities like New York City and Berkeley—in 2020, according to the Fair Elections Oakland coalition, there was only a total of $153,000 available to be distributed among eligible candidates.

“So many of our flatland residents are really not able to participate in the electoral process because they’re worried about not being pushed out of Oakland, not being evicted, not being overpoliced,” suk told Sludge.

“We want to bring in folks from the community who want to be part of a system but maybe don’t have the means,” said suk. “We know as a model from Seattle, by receiving these Democracy Dollars, vouchers will provide an opportunity to participate and larger voter engagement, which is ultimately Oakland Rising’s main goal: to bring a more equitable democracy, and also bring voice to those who will be targeted to be left out.”

In contrast to typical campaign consultants, who primarily target high-propensity voters, Oakland Rising’s suk says the coalition’s member groups and volunteers will be targeting flatlands areas, “​​getting out and leading the civic engagement program—calling, texting, door knocking, holding events in community—so that folks know about this and what it will bring for them.”

The coalition says it plans to place the initiative on the ballot in November through an ordinance that would be analyzed by the Rules and Legislation Committee, and passed after public hearings by the Oakland City Council. Once the measure qualified for the ballot, according to the city charter, it would then be reviewed by the city auditor and city attorney’s offices.

Measures to expand access to the democratic process have won recently in Oakland: in 2020, a supermajority of voters approved Measure QQ, an ordinance that allowed 16-year-olds to vote for the office of the school board director.

In Oakland, the coalition says it will weigh designs for the program’s funding and that it could employ a different revenue source than does Seattle’s voucher program, which is funded through a $3 million per year property tax that was approved by voters with 63% support in the 2015 “Honest Elections Seattle” initiative.

Suk says the campaign recognizes that new processes like Democracy Dollars will take a few cycles to ramp-up in use, with the first step being public education. “We’ll see more grassroots candidates run more viable campaigns and see an increased turnout of low-propensity voters, those who have been left out will have a voice in Oakland,” suk said. “If it passes in Oakland, it can build a movement toward real campaign finance reform.”

At last week’s virtual event, suk was joined by Daniel G. Newman, president and co-founder of MapLight, who helped implement a public financing program in Berkeley—one that uses a small-dollar matching model, like the one in place in New York City—that was recently expanded in a unanimous city council vote. Also joining was Seattle City Councilmember Teresa Mosqueda, who was re-elected last year to a second term in a citywide at-large council seat and was among the first candidates to win using democracy vouchers.

Remembering her first campaign, Mosqueda said, “I was 37 years old, a renter like 52% of the Seattle population, and we needed more renters on city council. The individual stepping down was in his 60s, we wanted to diversify who got into that seat. We worked with the Washington State Labor Council, community partners, and immigrant groups. Candidates often take themselves out of the race before they enter, asking, ‘Can I afford it?’ I didn’t have deep pockets. A lot of groundbreaking candidates before me had to refinance their condo.”

More than just expanding who felt empowered to run for office, Mosqueda said, “This was an organizing opportunity for us to go into communities and talk to neighbors and ask for their support, and ask, ‘Have you received your democracy vouchers?’ In neighborhoods that never had their doorbells rung, to educate them about the tool of democracy vouchers, in addition to showing that candidates like me wanted their support and more people engaged in local democracy.”

Councilmember Mosqueda pointed to the rise in Seattle small donors as evidence that the program was succeeding in its goals of increasing the number of contributors as well as the number of candidates. In the 2021 cycle, over 47,000 Seattle donors used vouchers and nearly 4,000 more people donated vouchers and money, according to data from the independent Seattle Ethics and Elections Commission, together making up nearly three-quarters of contributors. The number of Seattleites using vouchers alone last year rose from nearly 31,000 in the 2019 cycle and from over 15,000 in the 2017 cycle. The 2019 donor number was calculated to be about 8.5% of eligible Seattle residents, and the 2017 total was about 3.8% of eligible residents, meaning that the share of voucher users more than doubled in their first cycle in use.

Altogether in Seattle, the most recent cycle saw about six times more individual donors than the 9,849 contributors who gave in the 2015 cycle, before the vouchers were in use. Last year, where all of Seattle’s leading mayoral candidates opted in to the voucher program, nearly 136,000 vouchers were given by city residents, according to the program’s data dashboard.

“Every Oaklander deserves effective local government, with elected officials accountable to us for the decisions that affect our lives,” said suk in a statement after the campaign launch event. “We need to enable local officials to make real connections with constituents and do the work we elect them to do: make Oaklanders’ lives better. The people of Seattle did it, with an innovative ‘democracy dollars’ program that empowers voters of all backgrounds to move money to candidates they like, and candidates to work hard for their constituents rather than spending time pandering to big money. Now it’s our turn to show the rest of the country real local democracy that reflects our diversity and our values.” 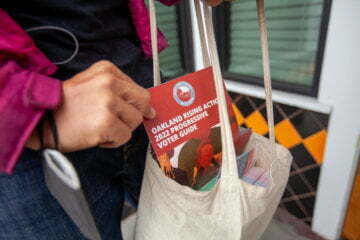