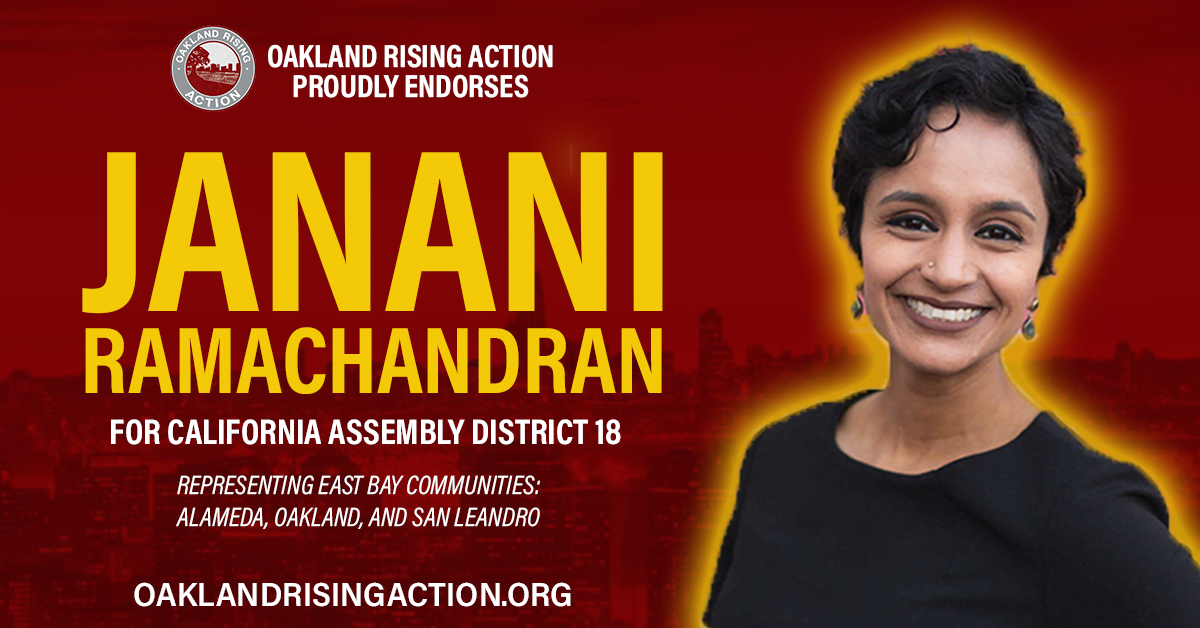 Oakland Rising Action endorses candidates who champion the issues of Oakland’s working-class, immigrant, and communities of color. Janani Ramachandran is committed to fighting for the following issues with concrete policy solutions:

Janani is an East Bay native. She is the daughter and granddaughter of immigrants from a small South Indian village who worked tirelessly every day to give her the opportunity to pursue her dreams. Janani’s passion for justice was evident at an early age. At 16, while relocating to India for a few years, she founded a nonprofit that built libraries in under-resourced schools in her local community. After graduating from Stanford University, Janani worked as a home-visiting case manager at a community health clinic, serving immigrant mothers experiencing domestic violence and homelessness.

Witnessing the horrors her clients faced at the hands of our inequitable legal system, she was driven to make a difference as a lawyer and attended Berkeley Law. There, Janani represented tenants facing eviction from some of Oakland’s most notoriously corrupt landlords. This inspired her to want to affect change at a higher level. She has previously served on the Oakland Public Ethics Commission, and currently serves on the California Commission on Asian and Pacific Islander American Affairs. She recently worked as an attorney at Family Violence Appellate Project, pursuing legal appeals and advocacy efforts to improve access to justice for all survivors of abuse.

Janani is running for State Assembly because the time for timid ideas is over. We need bold solutions and leaders with the courage to fight for them.

With your help, we can put the people first in Sacramento and have California’s first South Asian Assemblywoman, and first LGBTQ API Assemblywoman – by electing Janani Ramachandran, who is fearless in the fight for justice.

If elected, Janani would be just 1 of 3 tenants in our Legislature, out of 120 lawmakers.

THE RACE FOR STATE ASSEMBLY

Janani is running for State Assembly in District 18 because of the unprecedented challenges of COVID-19, and worsening income inequality, environmental catastrophes, and racial injustices. These problems demand a fresh perspective from a leader who has been working directly with her communities for years. California doesn’t need just another Democrat in Sacramento – we need a bold advocate who isn’t bought by corporate interest groups and who will deliver real progressive change for Californians.

Janani’s fearlessness in the fight for justice starts with six key policy principles:

– Housing is a human right. We must proclaim that right, beginning by enacting a moratorium on all evictions and foreclosures during the pandemic, by providing better services for our houseless neighbors, and by repealing oppressive laws such as Costa Hawkins and the Ellis Act.

– Economic opportunity is a human right. Every Californian deserves the ability to have a stable job and economic independence. We must prioritize the growth and development of small businesses in the post-pandemic recovery period.

– Safety in our homes and communities is a human right. We must radically re-imagine our criminal justice system to heal survivors and perpetrators of harm in order to end toxic cycles of violence. We can start by prioritizing proven interventions, including transformative justice programs and mental health services with a culturally centered lens.

– Healthcare is a human right. We must implement our own Medicare for All network because every Californian deserves quality care.

– A living wage is a human right. We must align the minimum wage to California’s true cost of living – at least $22.00/hr – which will lift millions of California families out of poverty while strengthening our economy.

– Clean air is a human right. We must enact a Green New Deal quickly, because California’s extreme climate events and deadly toxic pollutants harm us all, especially low-income communities of color.